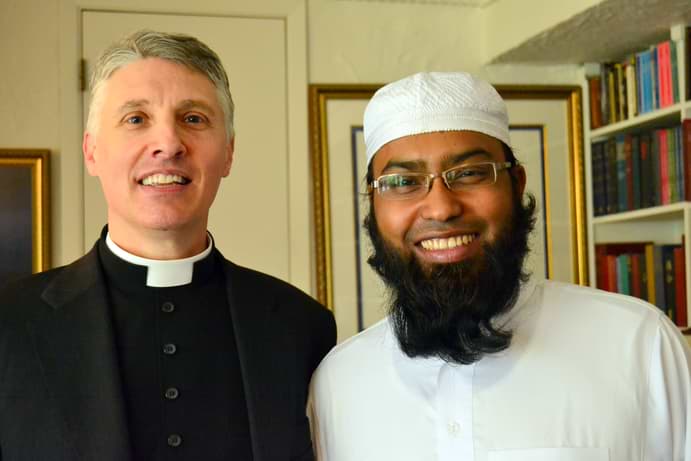 Some might say that St. George’s has interfaith work at its foundation.

Though the cemetery had been closed for many years when St Georges was built and opened in 1870, the church ” is built on the site of the first Jewish cemetery in Montreal, active between 1775 and 1854.” [as described on a panel placed on the Peel Street side of the garden and generously donated by the Drummond Foundation and in the memory of Guy M. Drummond, Q.C 1915 – 1987]

In December of 2016, members of St. George’s Corporation met at St. George’s with Peace Initiatives Canada, to imagine how different faith communities might work together to transform the community. On January 29, 2017, we met again at the Imani Community Centre (Peace Initiatives’ home) to further our conversations and plan a project to bring food and compassion to the poor and homeless on the streets of Montreal. Shortly after our meeting we heard of the horrific Mosque shootings in Quebec City. Out of the tears of this tragedy we committed to go forward with our interfaith partnership to show the world that violence and intolerance would not shake our resolve to communicate, through action, one of the shared tenets of our respective faiths: That the few differences that separate us pale in comparison to the vastness of what we share in our common humanity as peoples of faith. Thus was Civitasx born in the spring of 2017.

Civitas is a latin word meaning “a community with a sense of purpose”. The superscript “X” refers to the unknown exponential power of such a community when it is gathered around a shared vision and a common mission.

Currently Civitasx has one focal project, Meals to the Streets.